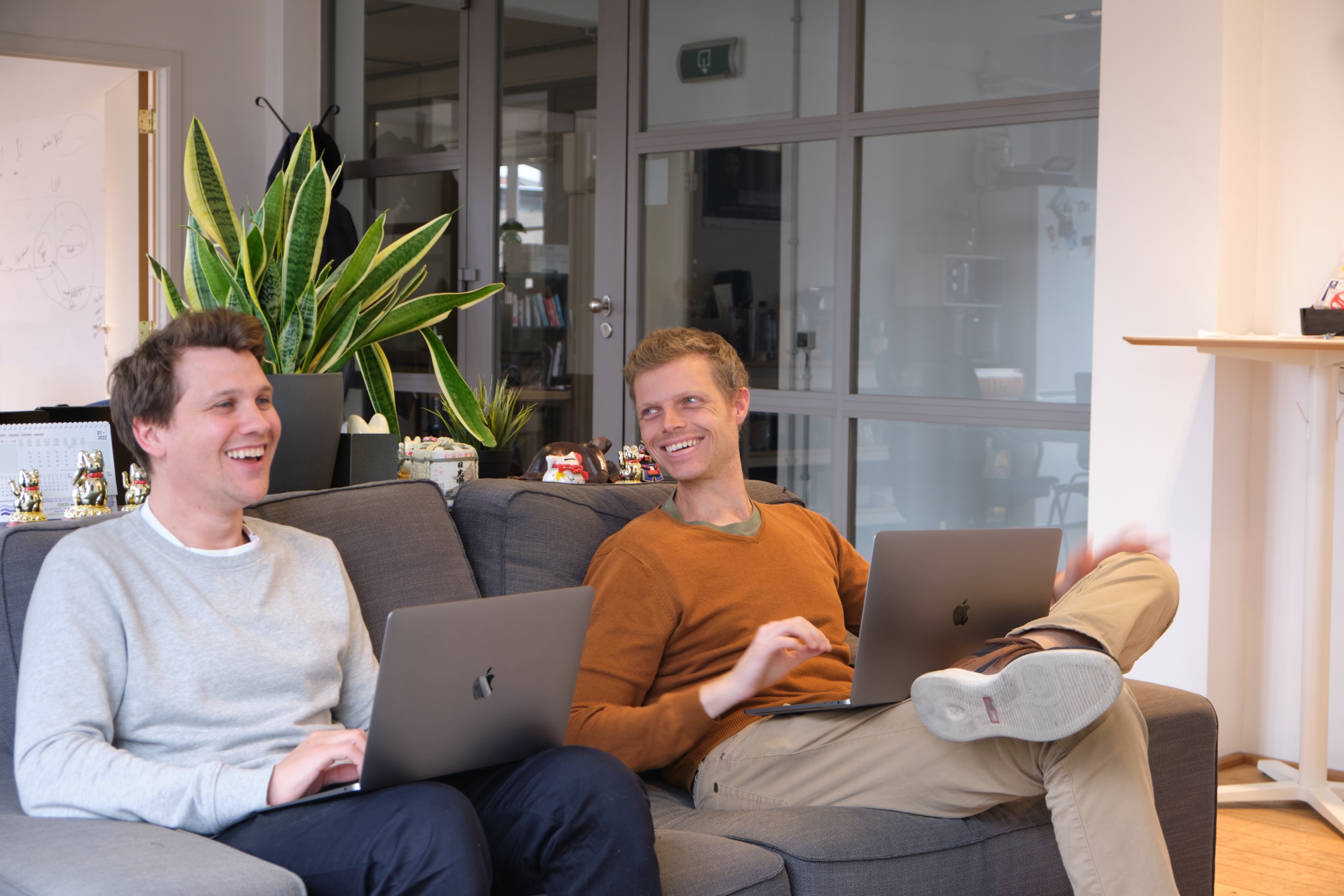 The challenges we overcame to launch Curvo

We’re happy to be writing this update. It’s been ten months since we welcomed our first customers to Curvo, in October 2021. But it took over two years to launch the app, mostly due to regulatory hurdles we had to pass.

We want to take some time to reflect on our journey. We particularly wish to share the struggles we went through in launching a fintech app. We hope you find it useful if you’re thinking of launching a consumer finance app in Europe.

We (Curvo founders Thomas and Yoran) have known each other since secondary school. We created our first venture Sutori in 2014, which now serves 2 million educators and students across the world.

Whilst building the company in the US, we started to think about our financial future. When we looked deeper into the Belgian pension system and the demographic changes coming up, we realised our future was under threat. We had rubbish saving accounts in Belgium losing money every year due to inflation. Yet we didn't trust our banks to invest our money wisely (selling us overpriced pension products). There had to be a way we could take matters into our own hands by investing ourselves. Fortunately, after some bad experiences with individual stocks, we discovered passive investing. The diversification of index funds and ETFs, their low cost and the lack of reliance on the "magic" of an active manager convinced us this was the best way we could prepare for our future.

While setting up his passive investment strategy, Yoran started sharing his experiences through his blog to help new Belgian investors get started. We quickly realised that the majority of books and articles are written for a US audience and there was a lack of materials specific to Belgium. The gap also led Yoran to create Backtest, a backtesting tool similar to Portfolio Visualizer but built specifically for European investors. It's free and allows you to backtest your portfolio of ETFs with historical data. The platform has grown to roughly 1,000 users per day.

Friends and family asking us how to invest

As Backtest started to grow, friends and family would ask us about investing and what to look out for, how to build a portfolio of index funds, how to handle taxes, which broker to choose, etc... But from their reaction we also realised that when investing the "DIY" way, you need the patience, knowledge and confidence to make those decisions. We started toying with the idea of launching a service that would allow anyone to invest without having to go past these hurdles. It would be based on passive investing, which we believe is the best way for the majority of people to invest. And it would be built for our generation, with a focus on automated savings. In essence, we wanted to build the service that we wish existed when we first starting investing.

We looked at the Belgian market and we saw a gap as millennials and Gen-Z were not being served by the traditional players. The idea for Curvo was born.

But we had to figure out how to turn the idea into reality.

Belgium isn’t exactly known for its innovation when it comes to fintech, although there are some neat products in the market like Accountable or IBANfirst.

Being new to the finance industry, we naively thought we would be able to launch fairly quickly after getting an approval from the regulators. However, we soon learned that we simply can’t just launch the app and expect to welcome customers after a couple of months. The industry is tightly regulated (rightly so!) and there are quite a few difficulties to resolve before launching.

One of our early findings was that we couldn’t launch Curvo independently. We simply didn't have the capital or expertise required to get our own licence. We had to partner with an existing asset manager who would help us launch the product and handle the regulated aspects: the compliance with anti-money laundering laws, the “know-your-customer” checks, as well as the discretionary management of portfolios.

Forming a partnership is difficult. We were just two guys with a PowerPoint presentation on the problem we wanted to solve and a few ideas on how we would solve it. Although we had experience as entrepreneurs, it would still be a tricky process to find the right partner. It’s like a marriage, you’re making a big commitment and you both need to trust each other.

After being ghosted by a few parties, we formed an agreement with the wealth managers at Pire Asset Management to get Curvo off the ground. Things started well. We were excited at the prospect of working together and building a solid foundation.

The first step was to present our project to the regulators. Writing up the proposal took almost a year. Note that at this time, we still hadn’t developed the app. Our website was just a landing page with a few articles answering questions from our waitlist. Instead of building, our time was spent creating one of the longest business plans ever witnessed.

We also passed some exams (“Loi Willems”) to be certified with Febelfin. Costs were starting to escalate as we had to take out business insurance, pay for a security audit of the app and had to bring in an independent board member. There were so many hoops to go through but we were tackling them one by one.

We had put in so much effort. So when we got word that we wouldn’t be able to launch Curvo as a joint project with Pire, we were devastated. The project could be launched but only if it was 100% part of Pire, meaning that we would become employees and not entrepreneurs. We almost threw the towel in. But we knew there had to be a way to get the product launched. We were still laser-focused on solving this problem for ourselves, which was a strong motivation.

Finding a partner in the Netherlands

After speaking to various Belgian parties in the industry (special thanks to everyone that took time to chat with us!), we were told to look to the Netherlands and Luxembourg. Both countries are more open to new initiatives in the finance industry. For instance, whereas Belgium has 16 licensed wealth management firms, the Netherlands has over 200.

We listed all Dutch and Luxembourg wealth management firms in a spreadsheet and after a quick review of their websites, decided whether we would reach out to them or not. It’s unbelievable how we were making assumptions based on a website. But we had to move fast as we realised it’ll take us a while to build a relationship with a new partner. After a few meetings, some rejections and multiple interested parties, we were fortunate to find the right partner in NNEK.

NNEK would handle the discretionary management of portfolios, the regulatory compliance as well as the back office. They were also one of the few firms we had seen that had a good technical infrastructure, which was important if we were to integrate our app into their system. It was a great match and we decided to move forward with them (and they decided to move forward with us!). They had already passported their licence to Belgium and had clients in Belgium so it wasn’t difficult for them to accept clients through Curvo’s app.

We then spent nine months developing the product. On the tech side, this meant Yoran learning how to build a mobile app from scratch. On the legal side, this meant building the optimal Curvo portfolios for Belgian investors, and offering the easiest sign-up process while still complying with all the regulations.

During this time, we continued to have a landing page on Curvo where we were collecting emails for our waitlist. When someone left their email, they would be prompted to book a time to chat with one of us. We did over fifty calls with prospective customers to better understand their needs for a product like Curvo. These insights were invaluable for us to build the right product.

Something we’ve focused on from day one was to openly share our journey. Every single month, we write an update and record an Instagram video. The goal was to build trust with our waitlist of potential customers.

As “outsiders” to the industry, we felt like there was a clear lack of differentiated products on the market. We saw the rise of neo-banks such as N26, Monzo and Revolut grow their market share by providing a unique brand which was the opposite of traditional banks. We approached this in the same vein thinking of what we would like to see in a brand and what sort of app we would like to build.

Branding was core to this strategy and us having a clear identity when it comes to our messaging through our tone, the way we explain things, the app and the ease of use for the customer. This will constantly evolve but it was a core element of us building Curvo and launching the app.

“Build it and they will come” is a mantra that has never worked. We’re all guilty as entrepreneurs of thinking everyone will want to use the product as much as you do. We’ve decided to be methodical in our approach by running various marketing experiments to get the word out on Curvo, and to find out which stick.

As our pricing structure is 1% on your assets under management, it’s obvious we’ll need sufficient customers to hit profitability. But we’re on our way and we are building Curvo for the long term. As we’re dealing with people’s life savings, it’s important our customers understand that we’re with them throughout their journey. Building trust as a startup is tough, especially when dealing with people's money. So our approach is to be as transparent as possible. We do this by openly sharing our numbers, our progress, and our reflections on marketing experiments.

Ten months after launch, we still call every new Curvo customer. We do this to answer any questions they may have, to understand their reservations and to help them on their investment journey. At the same time, we learn invaluable lessons about what we can improve in the app and our communication.

We're pleased to have hung in there and launched Curvo. Being focused on the Belgian market gives us an opportunity to really solve the problems that our generation is facing.

We experienced first-hand that navigating the regulatory hurdles as a startup is tough. If you’re an entrepreneur who is facing these challenges and would like to discuss any of this, then don’t hesitate to reach out to us at [email protected] - we would love to chat with you!

Special thanks to the following people that helped us build Curvo over the last two years. Egbert for believing in us. Marta Veludo for setting the Curvo brand and identity. Emile-Victor for designing the lovely website and Pierre Abergel for the app. Special thanks to our colleague Ben Corvilain for having been part of this adventure. We’re only just getting started and we’re excited for the future!

Curious to learn more about Curvo?